Like Cheonjiyeon Waterfall, Jeongbang Waterfall is another famous waterfall in Jeju Island. Jeongbang Waterfall, falling from the cliff is 23m high and 10m wide. It has unique scenery not only in Korea but also in the oriental area. It is called "Jeongbang Summer Waterfall" due to its picturesque scene when viewed from a boat and is one of 10 Scenic Wonders of Jeju Island. Jeongbang Waterfall is famous for the legend of "Seobul" who came to Jeju Island in search for an elixir of eternal life for Chin, the powerful Emperor of China 2000 years ago. After he failed to find the elixir, he carved his name "Seobul" on the cliff of the waterfall and returned to China. 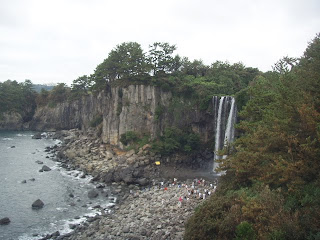 My hubby didn't want to go down because we could see from about half of the stairs but hajuma heard us and she said that we would regret it if we won't go down. She was right! It's much beautiful when you look it closer. 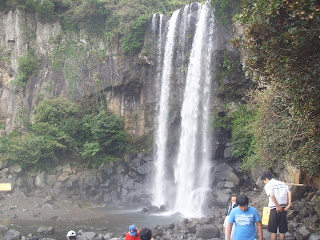 No wonder why there were lots of people came to see the beauty of the waterfall. 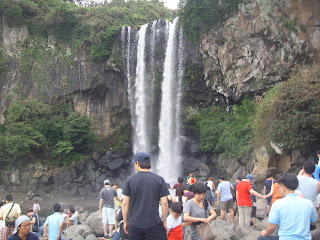 The waterfall is unique because it's by the sea. 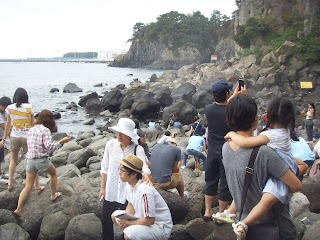 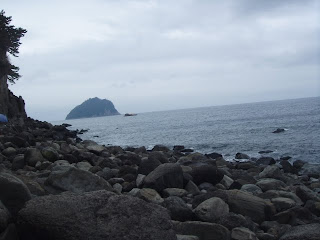 Near the entrance, there are stores selling tangerines (famous fruits in Jeju), tangerine chocolates (3 boxes for only $10), coconuts, mangoes, etc. 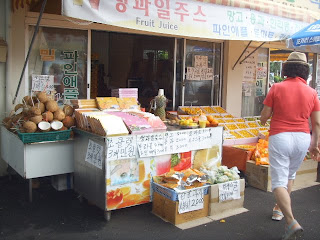 The admission fee is only $2 and it's free for Jeju residence.