There are over 360 parasitic volcanoes on Jeju Island most of which have no craters. Those that do have craters shaped like upturned bowls or horseshoes. However Sangumburi Crater which was formed by an explosion without the ejection of lava or volcanic ash has one single hole known as the Marr crater. It is the rarest type in Korea and indeed the world. 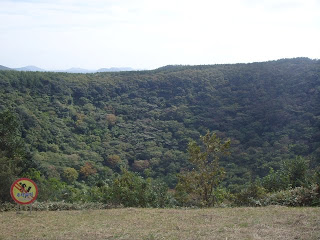 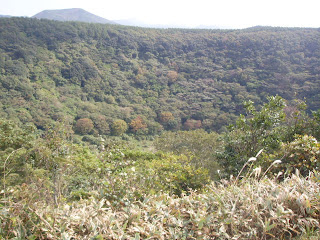 Sangumburi Crater was designated as Natural Monument No. 263, the reason being that the plants growing inside the crater have been isolated even from the plants in Mt. Halla. Because of this phenomenon, they have become valuable resources for studying the geographical distribution of plants. Add this from the priceless value of the crater itself for geological study and you can see why Sangumburi crater is so unique.

Sangumburi is located in Gyorae-ri, Jocheon-eup, Jeju City 400 meters above sea level with an exterior circumference of 2,067m and an interior circumference of 756m. Its height is 438m, its depth 132m and it is 300,000m².About 450 species of plants grow in Sangumburi. On the exterior sides of the volcano are pampus grass colonies, producing a spectacular fall display. The interior slope of the crater shows a wide range of vegetation with seasonal variations depending on the amount of sunlight. 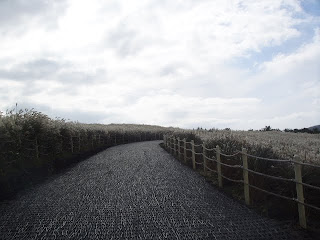 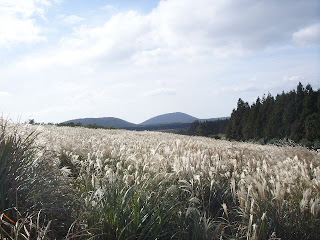 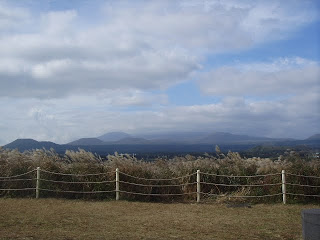 Sangumburi crater is regarded as having a high academic value because of the well preserved Ligustrum ovalifolium community, Orixa japonica community, Adonis multiflora community and Eranthis byunsanensis community which are rarely found anywhere else.

The crater is also well-known as a habitat for various wild animals ranging mammals including roe deers and badgers, to birds and reptiles. 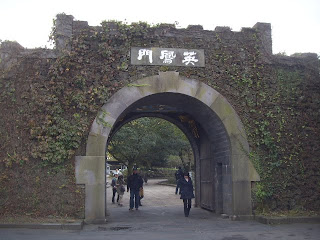 The beautiful that you can also enjoy while walking with loveone, family or friends. 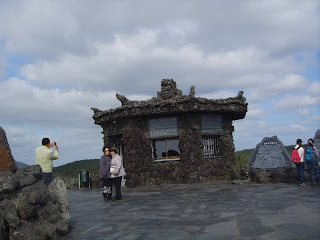 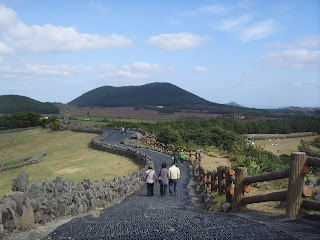 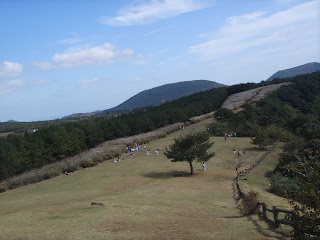 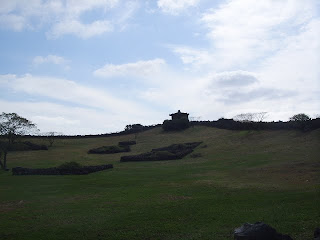 You know that you are in Sangumburi if you see this cones or bell shapes outside. 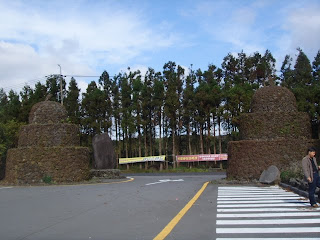 Have a Safe Trip

I always miss travelling when I see planes. I love traveling and I like taking planes eventhough I feel nervous when I'm on it so I pray several times or keep praying until I reach my destination. I've been to many countries and I've been on a plane for many times so you won't be surprised if I tell you that I've also met many strange people while flying.

It's too tiring to be on the plane. Besides it's also irritating when you are with naughty kids, noisy women or drunken men. Sometimes there are also rude passengers who take off shoes when they know that they have stingy smell feet. It's really hard to avoid these kind of passengers but we can't complain. Imagine being on the plane for many hours with them. Ugh!

I wish I can have a private air travel. And it seems like my wish will come true soon through private jet cards. Nothing is impossible with the Planeclear Jet Charter Memberships. It is safe and reliable. Free from terrorists and free from rude passengers. Check it out now and see how you can save up to 50%. Have a safe trip to all of us!

Posted by Unknown at 9:01 PM No comments:

Email ThisBlogThis!Share to TwitterShare to FacebookShare to Pinterest
Labels: uncategorized

Located in Aewol-eup Gwagji-ri, Gwagji Beach is famous specially for foreigners. It is 30 minutes drive from the City so it's the best place to relax. The beach is famous from its good taste of mineral water coming up from under the sea so people long time ago were very thankful for it. But now, the water don't use for drinking. In summer, the water is so cool that every tourists can enjoy swimming.

The beach is also a great place to watch the sunset. 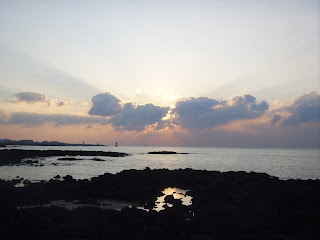 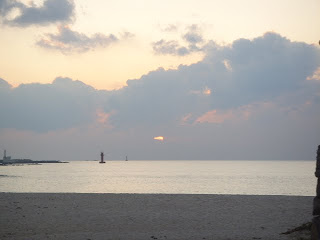 The beach is most famous for its Open-air Public Bath or for Korean, it's called the "Gwamul Nocheontang". 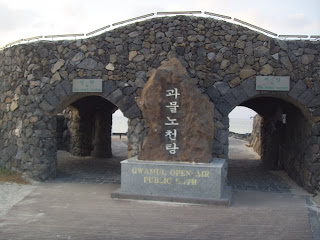 Like open-air public bath, the ladies room is also separated from men's room. 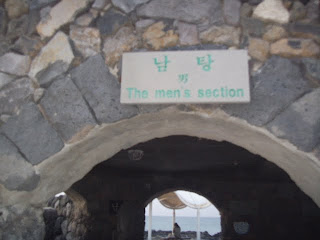 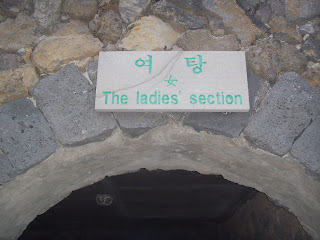 The entrance for the ladies room. 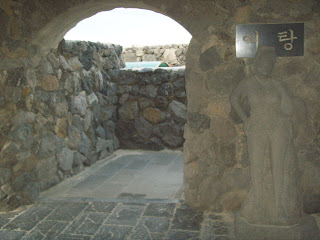 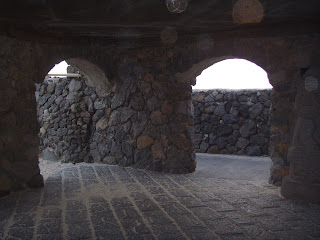 Here's what inside the ladies section. It's more beautiful in the summer because there seems like a waterfall inside. 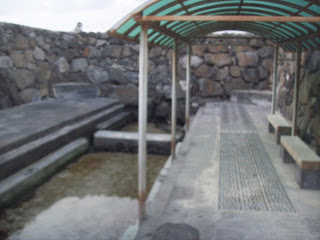 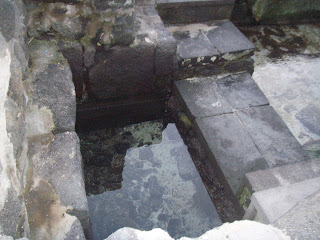 You can just also relax inside the public bath without taking a bath. 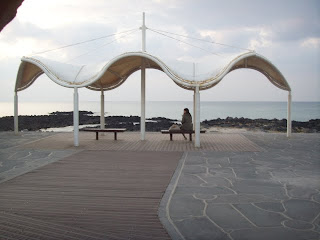 Outside the public bath are figures of black pigs which are famous in Jeju. By the way, you should try black pigs samgyopsal or barbecue if you visit Jeju-do. 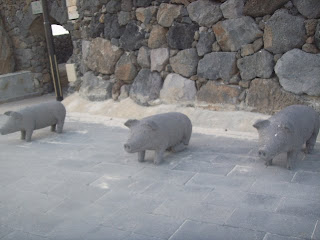 Here's another symbol of Gwagji Beach where tourists love to take pictures. 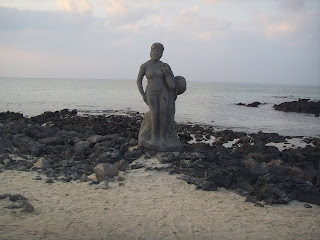 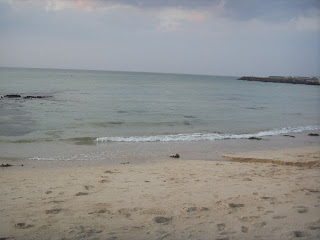 And here's where you can see lots of seaweeds. 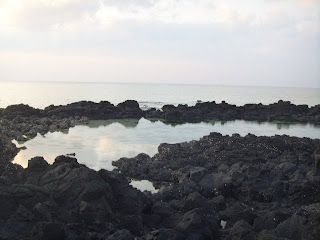 Posted by Unknown at 7:58 PM No comments:

My hubby wanted to eat Sweet and Sour Pork so we checked on the net and searched for Chinese Restaurant. We saw one so we decided to hit the road to Jin Si Hwang Restaurant. According to the navigation it took 37 minutes to the restaurant but still we went there because we were craving for chinese food. The 37 minutes took us more than an hour because of the foggy road. We couldn't see the road. I was so worried but my hubby comforted me. He said he would drive slowly and safely. Actually, I could see that he was also worried. He said it was his first time in his life. It was another memorable experience in Jejudo. It seems like the cars weren't moving. Sometimes we had to stop for a second because the fog was blocking us. Finally, we arrived at the restaurant. My hubby told me to eat slowly because we had to wait for the fog to disappear or lessen. Thanks God because after dinner, the road started to clear and we arrived home safely.

Email ThisBlogThis!Share to TwitterShare to FacebookShare to Pinterest
Labels: jejudo, me, memorable experience

Got Shot Because of Sore Eyes

I woke up in the morning with painful eyes. I asked my hubby if we had medicine for sore eyes because my eyes were sticky and I couldn't open them. My hubby got up and told me to prepare to go to the hospital. We went to the nearest hospital in a small town and to our surprise, there wasn't any ophthalmologist. The receptionist said that I can get a check up and they can give me precriptions for medicine. I met the doctor. He asked something about my eyes and the nurse brought me to the other room where they gave me a shot. Ouch! I don't know what that shot for. I didn't know they also give shot for sore eyes. It was my first time, anyway.

We bought the prescribed medicine and went home. After few hours, my hubby told me to go to the ophthalmology in the city. We found a good ophthalmologist in the city. He examined my eyes and the nurse was about to give me a shot but I told her that I got shot in the hospital. I also showed the medicines that we bought. They prescribed us different medicines and I felt relieved after taking the pills and putting some eye drops in my eyes.

My eyes were sored for two days. After 3 days they were fine. A little bit red but not painful anymore. Thanks God! It was really uncomfortable to work with eyeglasses indoor.

Posted by Unknown at 8:44 PM No comments: