Yongduam is a basalt rock formation known as "Dragon Head Rock", is said to have once been a dragon that lived in the Dragon King's Palace beneath the sea, and in its desire to reach heaven, was turned into stone. The submerged body of this oddly shaped structure is the result of the solidification of flowing lava during a volcanic eruption and is about 30m long and its head rising about 10m above the sea. 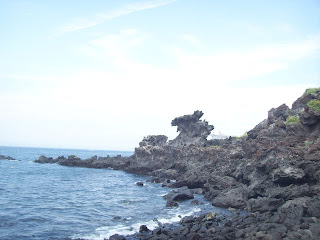 Two legends exists as to the circumstances that led this dragon to meet its fate here by the sea. In one version, a dragon came to Mt. Halla as the emissary of the Dragon King to gather the elixir of youth. However, the other version asserts that a dragon that was ascending to heaven was said to have grabbed a sacred jade stone in its mouth which had belonged to the guardian of Mt. Halla. In either case, the legend purports that the guardian of Mt. Halla struck the dragon with an arrow causing it to fall into the sea, leaving only the head protruding above the water to eternally wail over its fate. If stared at steadily from about 100m to the west when the waves are moderately high, the dragon's head may seem to roar and sway.

To the east of Dragon Head Rock is Dragon Pool where, it is claimed, this dragon lived. 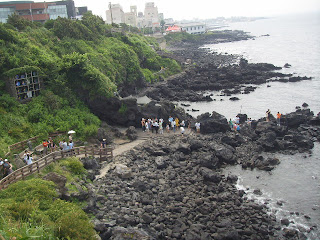 Located in Yongdam-dong, Jeju City, Yongduam is a rock formation on the shape of a dragon's head. The shape was formed when lava become solid while lava flowing out of a volcano two million years ago. The rock with 10m in height and 30m in length is a local natural culture property. And it's academic value in geology is highly recognized. 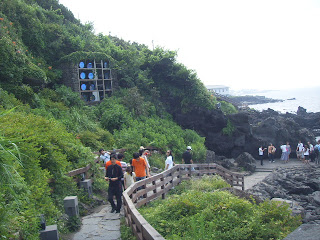 Yongduam, a rock showing a writhing dragon with a grudge. According to the legend, a dragon living in the Dragon Kingdom wanted to ascend to heaven, but it wasn't an easy thing to do. Realizing that he could be a real dragon with a precious pearl of the mountain god of Halla, the dragon stole the precious pearl from the god and successfully descended to the valley of Yongyeon. However, he was discovered and shot by the god's arrow while flying. He landed on the beach where he turned into a petrified stone, crying and wreathing with agony and a grudge. Yongduam itself shows a roaring dragon which is about to ascend from the sea. When the day is windy and waves are strong, it will make you feel like a dragon is going spiraling up to the sky. With 30 meters of the body submerged, the 10-meter high tall rock will cast a spell if you steadily gaze it at sunset. The 100-meter point from the rock is one of the best distances if you really want to appreciate Yongduam Rock. In particular, when the waves are splashing, it is the day to watch this rock. It will make you think the world is turning upside down or the dragon is about to rise from the sea, making a roaring sound under the wrath of a god. Located 200-meters south of Yongyeon at Hancheon River, Yongduam is a well-known symbol of Jeju tourism. It attracts a lot of tourists who want to see the shape of the rock.

You'll see some hajuma vendors selling seafoods. It's a kind of restaurant near the sea. 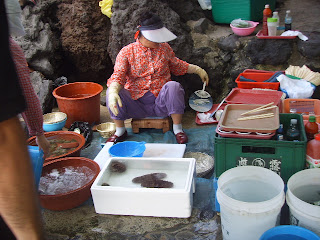 There are lots of customers having seafoods and drinking soju. 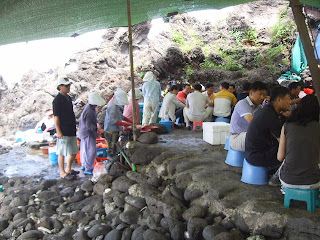 Look at the restaurant, isn't it cute? hihi.. 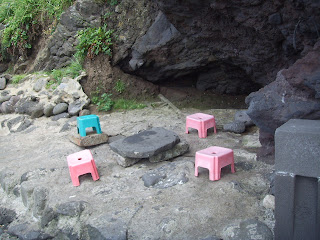