Of all the beaches and sea that I've been in Korea, I think Homigot is the best. The name comes from ho (tiger), mi (tail), and got (small port). If the Korean peninsula is seen as a tiger shape, Homigot (호미곶), in Pohang, Gyeongsangbuk-do, forms the tail. 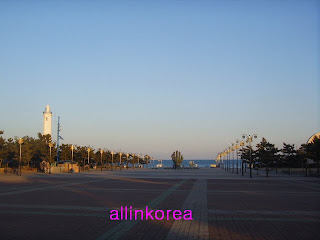 What makes this place more unique and famous is because of the hands. One stands in the middle of the plaza and the other one is partway into the sea. The palms of the hands face each other, symbolizing harmony and coexistence. 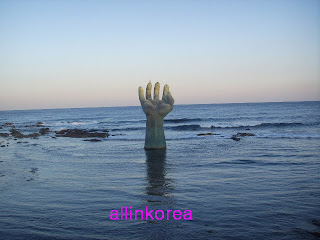 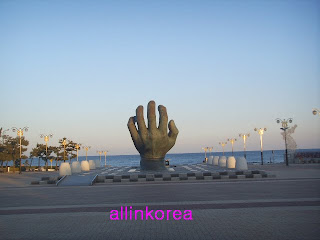 Since Homigot in Yongilman is located at the farthest east side of the Southern Korean Peninsular, the sun rises earliest at this site. The flame of Eternal Torch has been lighted by the sunlight at Homigot in Yongilman at dawn of the New Millenium, January 1st, 2000. The light along with the flame ignited by the sunlight of the sunset at Byunsan Peninsular and by the sunlight at Fiji Islands of the South Pacific Ocean will be preserved as the Korean People's never dying eternal flame for wishing peaceful unification of Korea and prosperity and welfare of Korean people all over the world. 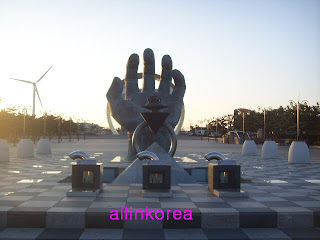 Incorporating the wishes of three million residents of Gyeosangbokdo and five hundred twenty thousands citizens of Pohang City, this sculpture was proposed by Eui Guen Lee, the governor of Gyeosangbuk-Do and Jang Sik Chung, the mayor of Pohang City and created by the sculptor Sung Kuk Kim, professor of Yeungnam University. This was made possible by the active support of Oh Young Lee, the chairman of the Presidential Commission for the New Millenium and by the sponsorship of Daegu bank.

There's also the Homigot Lighthouse which is 26.4 meters tall, and was designated as Local Cultural Asset #39. Koreans believe that the Korean map resembles a tiger, and the location of Homigot lighthouse is right on the tiger's tail. 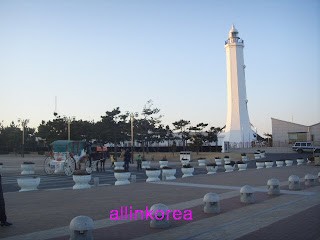 Email ThisBlogThis!Share to TwitterShare to FacebookShare to Pinterest
Labels: beach, days/ holidays, me, only in Korea, park, sea, travel, vacation