Except from Unification Observatory, we also visited Imjingak. Another worth-seeing in Gyeonggido which is also related to unification and freedom. At the Imjingak Toursit Site, you can see the Bridge of Freedom, Peace Bell and Unification Fond. It is free of admission and open throughout the year.

The Peace Bell which is 2.23m in diameter, 3.8m high and weighs 21 tons is made of bronze and tin in the korean traditional style. The bell pavilion which is made of wood with a four-sided arched roof, sits on an area of 70.5m² and is 12.18m high.

Those who are interested in ringing the Peace Bell, in the name of peace, unification and hope may purchase tickets which cost 10,000 won or around $10. The ringing time is 10:00 a.m. - 5:00 p.m. The method of ringing is seven strikes by individual or a group. 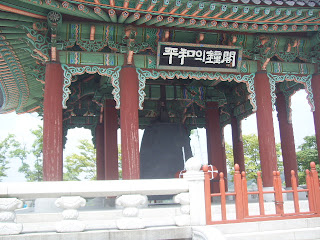 Standing behind Mangbaedan Memorial Altar at Imjingak Square, Freedom Bridge takes its name from the return of 12,773 prisoners of war in 1953 in the first exchange of prisoners after the signing of the armistice agreement that ended the Korean War.

Two railrooad bridges on the Gyeongui Line originally spanned the Imjingang River side-by-side. Both were destroyed by bombing and only the piers remained. To enable exchange of prisoners of war, the west was rebuilt as a temporary structure over the original piers. The repatriates were taken to Freedom Bridge by trucks and they crossed the bridge on foot.

Freedom Bridge is 83m long, 44.5m wide, and 8m high. It is a wooden structure reinforced by steel. Freedom Bridge has little architectural value but hold tremendous symbolic importance of "Return to Freedom". 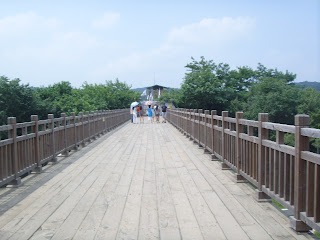 See that railway train to North Korea? Everything is all set and we're just waiting for the two countries to be united. 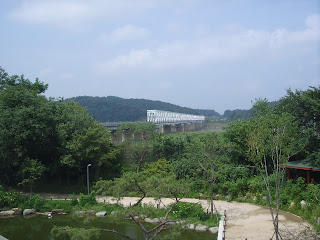 The remained of the train that was used by the people of North and South Koreans is still seen at the site. This steam locomotive is a symbol of the tragic history of the division into North and South Korea, having been left in the DMZ since it got derailed by bombs by the Korean war. It says that there are more than 1,020 bullet holes at the locomotive which shows how cruel situation had happened at that time. 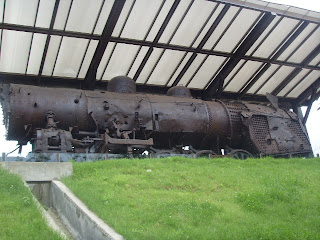 There are also some pictures of what happened during the war. 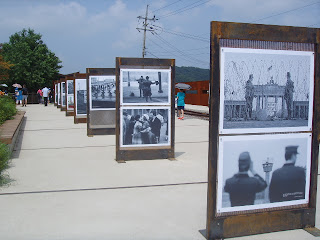 There's also an observatory or lookout to see some sites of North Korea. 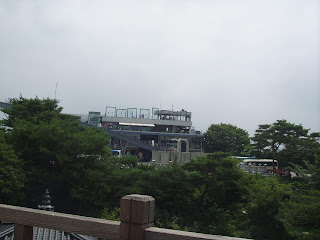