My hubby wanted to eat oysters so he invited me to go to Namhae. He remembered the last time that we visited Namhae, we had oysters in a restaurant. They were very cheap so now that he's craving for oysters, he suddenly thought of going to Namhae. Besides, it's also the best time to refresh and get some fresh air because winter is just around the corner so it's getting colder and colder everyday.

Our plan was to leave home in the morning but we got up at noon, had lunch and left at 1:30 P.M. so it was almost dark when we arrived there. We almost lose our way because we forgot to bring our navigation but luckily we reached before dark.

When we were in Hadong, which is the close town in Namhae, I told hubby that there is a bridge to Namhae. He said we've been to several places in Korea and I have a good memory to remember the bridge in Namhae.

This is the bridge that I was talking about. The Namhae Daegyo or Namhae Bridge. I didn't know that it's one of the most famous landmark in Namhae. 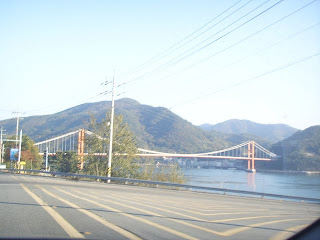 My hubby said that Namhae is as Island and the bridge is made so people can go to the mainland easily. Passing the bridge means we have now reach Namhae. Cool! 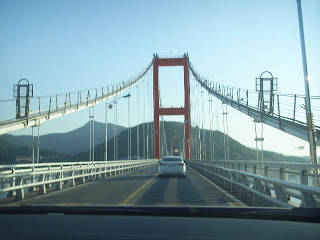 It's a long bridge and the view is so wonderful because of the water and village seen from it. 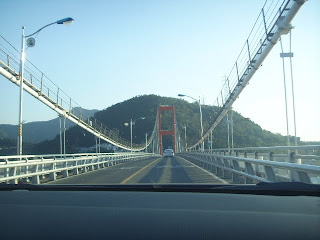