Korea has four types of coins, the 10 won, 50 won, 100 won and 500 won. They symbols of Korea on them such as the crane, admiral Yi Sun-sin, an ear of rice, and the Dabotap (a pagoda in Bulguksa, a Silla era temple in Gyeongju). 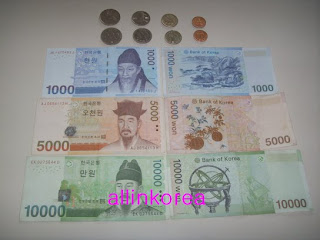 In addition to cash, Koreans frequently use bank checks and credit cards. People usually use credit cards even when they buy a small amount of thing. Koreans don't usually bring cash.

In Korea, you may ride the subway or a bus for 1,000 won within the same city. No matter how far or near your destination is, you just pay the same amount of money. About 10,000 won allows you and a friend to enjoy lunch or have some coffee.

Public transportation (bus, subway, taxi) is relatively cheap but housing and education are very expensive. The prices of the houses depends on the location or city. Housings in Seoul (Korean capital city), are expensive which makes it very difficult for young married couples to afford places to live. There are lots or apartment building in Korea because most people prefer to live in an apartment than in Korean traditional houses. Living in an apartment is more comfortable and warmer in winter.