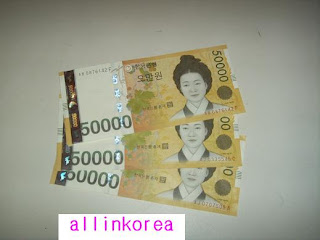 It's the new Korean bill that the government released last month June 23rd. I was planning to post about it earlier but I couldn't get enough time. It's the most expensive bill. It used to be 10,000 around 10 dollars (over ten dollars before but the exchange rate increased) but now it's 50,000 won, around $50.

The problem appeared when some people say that the bill was too weak and sensitive. They said the money tears easily because the vein (or root? what do you call the tie inside the money?) can remove easily because of its big hole. But later on they said that wasn't a problem so they would continue to release the money.

Email ThisBlogThis!Share to TwitterShare to FacebookShare to Pinterest
Labels: korea/koreans, only in Korea