A gold medal for Korea Baseball team. Yahooooo...I'm so happy to announce you guys that the Korea Baseball Team won a gold medal at the Olympic games. The game has just finished a few minutes ago and I was clapping and jumping when I saw the last part of the game. Actually, I felt very nervous on the last inning because they almost lose the game. There were three opponents standing on the first, second and third bases and there was only 1 out but in just a hit, they got 2 outs and that's how the game ended. The game gave me a big thrill and I think audiences all over the world, too!

I don't like sports but I sometimes peeped the TV and focused on it at the last inning and the game and players didn't disappoint me because it was really fun to see the Korea team winning. Whoa! Congratulations to all the members of the team who played well specially Lee Seung Yeob who did very well.

Here are the pictures taken from my tv. My tv has a time machine so it can go back in time and I can take the scenes that I want. 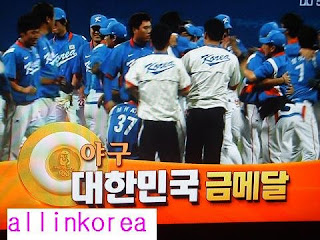 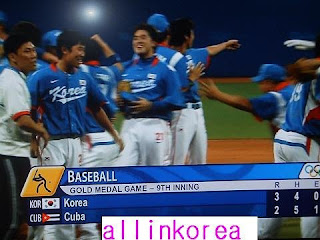 And here are the audiences in Beijing and Jamsil Stadium (Seoul) 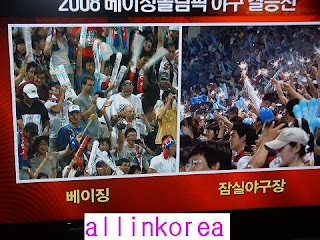 Once again, congratulations to Korea Baseball Team for winning a gold medal.
Posted by Unknown at 10:36 PM

happy Sunday idealpinkrose...hope all is well with you

nice.... congratulations to your korean team... its really phenomenal to win gold medal in the Olympics...