When we bought a tent, we found cards in the bag with the mat. They are cards for playing Go Stop, the best known Korean flower card game. 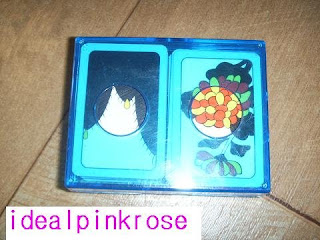 Players capture cards from a central layout by playing a card of the same month (flower). The aim is to collect scoring combinations of kwang (Bright), yul (Animals), tti (Ribbons), pi (Junk) among the cards captured. When a player's captures have a sufficient value, the player have to say "Stop" to claim payment, or can continue the game by saying "Go" in the hope of winning more (3 Go's doubled the amount), but risking that an opponent will win meanwhile. It is this decision to stop or go that gives the game its name. 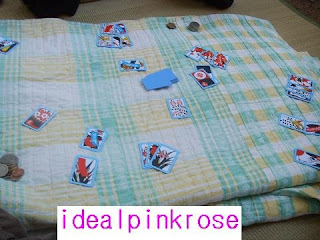 That's me, my hubby and my mother in law playing the card game when we went on a picnic. I used to play this game on the computer. I also play it with my in laws when we gather together special when there's an occasion like Thanksgiving Day and Solar New Year.
Posted by Unknown at 9:03 AM