I was at work training the new worker when somebody came and asked if he could use the bathroom in the hotel where I worked for. He looked nice so I said yes and showed him the washroom in the office. He smiled and he said he would come back. After a few minutes, he came back with Gary. As soon as my co-worker saw him, she recognized him. So we waited until he came out of the bathroom. It really was Gary of Runningman, a South Korean famous variety show that is on every Sundays.

My co-worker prepared a pen and paper and asked if she could get a sign. He asked her name and signed. I said me too! So he asked my name and gave me this. 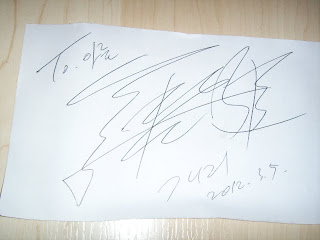 While he was going out we saw his name at the back of his shirt so we asked if they are making a video of their show. He said yes. So it's the Runningman whose making film outside. We just saw from morning that there were many people and cars parking at the beach and there are also big cameras. We just wondered what kind of film they are making again at the beach which is just in front of our hotel but when we knew that it was runningman, we got so interested that we couldn't work well.

When my boss came, he said he would go out to see the casts of the show. I asked are you going alone? Then, he said let's go together if you want. So, I and my new co-worker that I was training went with him. They were already leaving but we saw them inside the car. I saw Kim Jong-kook, Lee Kwang-su, Ji Suk-jin, Ha-ha and Song Ji-hyo. Unluckily, I didn't see Yu Jae-suk, the leader of the team and the most famous Korean MC.

My co-worker was about to take a picture of them with her cellphone but the staffs stopped her so I didn't try to take them a picture either.