We visited my hubby's friend, he's the guy that we met in Canada who is living in Gunsan. Before we separated we traveled around Gunsan and Jinpo Maritime Theme Park is one of the places that we've been to.

In August 1380, the 6th year of the reign of King U of the Goryeo Dynasty, a large pirate fleet consisting of around 500 ships attacked Jinpo and pillaged the surrounding area. According to Goryeosa (The history of Goryeo), the entire area was covered with the bodies of slaughtered Koreans. The pirates (then known as wako) carted bags of rice looted from private households back to their boats, reportedly dropping so much along the way that they left behind a layer of rice some 30cm thick. The naval command of Goryeo, headed by Na Se, Sim Deok-bu and Choe Mu-seon defeated the pirates Jinpo, using cannons developed by Cheo Mu-seon. It was the first sea battle in the history of the world in which cannons were used. 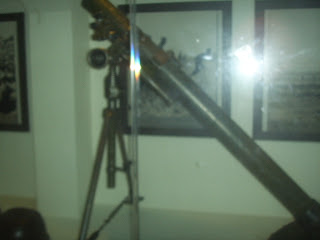 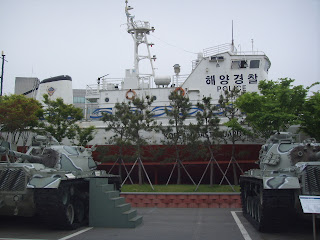 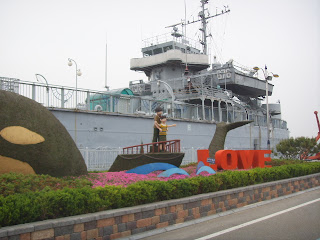 Displays in Jinpo Marine Theme Park are important assets of Korean Army and the Navy that now have been dismissed with its duty after serving it for many years of hard serving. Gunsan people gained the Ministry of National Defense's approval to freely use them for educational purposes, teaching nation's defense system to the citizens of Gunsan. In the Marine Theme Park are old military equipments: therefore they are asking people to please handle them with extra caution which is really necessary of course. 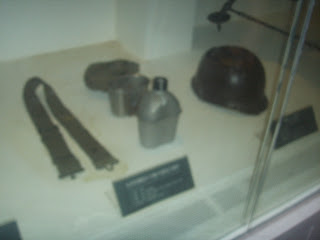 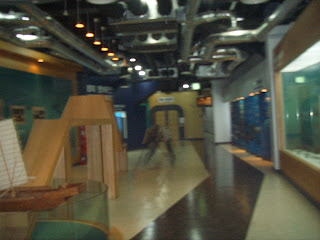 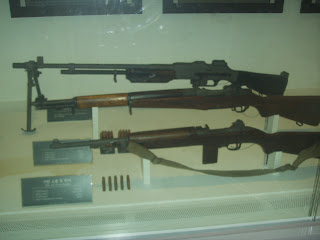 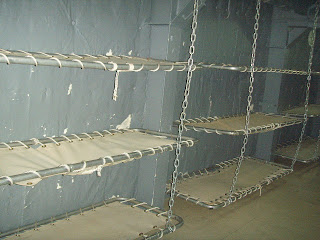 At the entrance of the theme park are some transportations used in war. 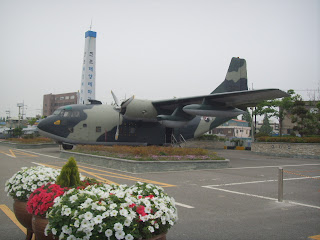 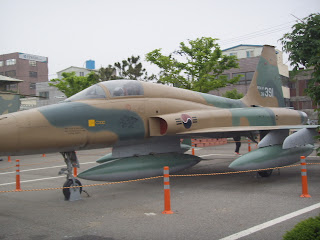 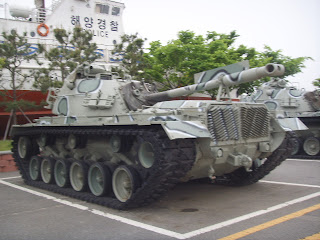 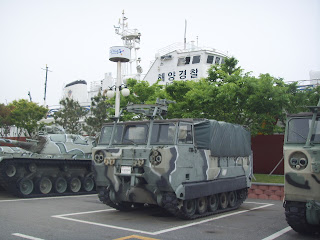 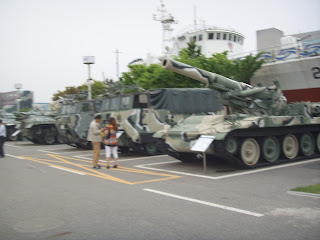 To understand more about the Theme Park, here's a brief History of Wi-Bong Ship.

The "Wi-Bong" is a Landing Ship Tank knows as (LST 849 in the US) which used to serve the US navy as the major Naval ship. Having being built on Jan. 16th, 1945 it participated during WWII during the landing mission executed by the allied forces.

On Jan. 13th, 1959, it was undertaken by the Korean troops in Seattle and on May 19th, 1959, it entered in port "Jin Hae" in Korea. (Named as the Wi-Bong LST 676). Since then, it was Korea's major landing ship performing during landing missions and transportations.

It made great contribution during the Vietnam War: situated in "Baek Gu" unit, it participated sixteen combat missions.

Moreover, for past 48 years, it played essential role in nation's defense system and was definitely played part in keeping world peace by providing its facility during trainings. It made its honorable retirement on Dec. 31st, 2006.

On Dec. 25th, 2007 Gunsan City signed a contract with Korean Navy to move the ship to Gunsan (at no charge) for educational purposes and a way to introdduce the city's history to outside world.

For its transporting capacity, the number of people composed of 125 ship attendants and 500 soldiers. For vehicles, it composed of 15 amphibious tanks, 15 trucks, etc.

From the entrance, the theme park has a very relaxing and a nice view. 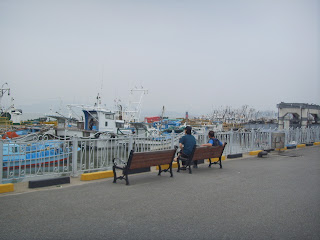 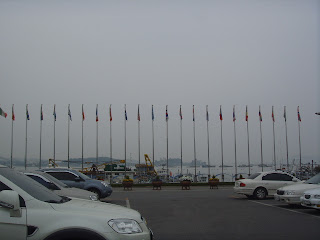 Don't forget to visit the Jinpo Maritime Theme Park if you happen to visit Gunsan. It's worth-seeing!

Hi, Nice post thanks for sharing. Would you please consider an intro to my website on your next post, I’ll return the favor. Please email me back. Thanks!