Today is Sam Il Jeol which literally translates Three-One-Movement. Three stands for March and One for 1st so it means March 1st Movement or known as Independence Movement Day. It is called Samil-jeol in Korean. It's a national holiday. It commemorates the Declaration of Independence proclaimed on March 1, 1919.

On this day, lots of taegukki or Korean flags are hanging on the trees specially on the roads and buildings. There are also flags in some houses and apartments. Others buy and some get from the government office for free.

Wow~ look at this Korean flag tree. I don't know how Koreans celebrate the Independence Movement Day except the flags hanging on trees or buildings. So, if you see flags hanging, you know it's Sam il jeol. 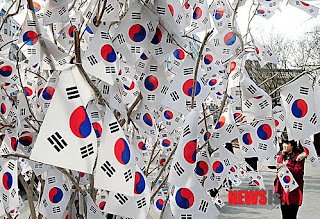