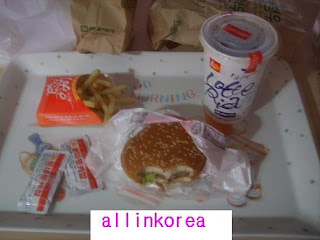 Do you think it will refrain me from eating hamburger because of the Mc Donald issue? Of course not! There's also a Korean Fast Food Company like Mc Do and it's called Lotteria.

My hubby met his friend and on his way home, he dropped by to Lotteria and brought this for me. There's a newly opened Mc Do near my place and it always attracts me to visit there whenever I passed by. But I tried not to but of course I can't deny that I'm also craving for a hamburger. Instead of going to Mc Do, I have to replace it with Lotteria. Btw, Lotteria has delicious hamburgers. Try their bulgogi hamburger, it's delicious!

I suddenly remember that I also saw Lotteria in Thailand and Vietnam. I was surprised!

Email ThisBlogThis!Share to TwitterShare to FacebookShare to Pinterest
Labels: food, only in Korea

Yes this is very beautiful place. but when i visited china i enjoyed my journey on many places without worry
because i hired china car service with professional driver.

i dnt know that mcdo had an issue there, is this bad?

i love mcdo burgers, never heard of any bad buzz here about mcdo.

ty for the visit sis.