A Russian Soyuz spacecraft carrying South Korea's first astronaut has blasted off into space from the Baikonur Cosmodrome in Kazakhstan. Yi So Yeon The first Korean astronaut, lifted off on a Russian rocket headed for the International Space Station last Wednesday. Last year, two Koreans were chosen among the 36,000 applicants. A man named Ko San, a 31 year old researcher and a female Ph.D Yi So Yeon, 29. Originally a reserve candidate, Ms Yi was picked for the flight last month after Russia accused Ko San, the primary South Korean crew member, of removing sensitive documents from a training centre. Mr Ko later apologised for his actions. The South Korean Government paid Russia about $27 million for the right to send the first Korean into space. Yi is set to fly back to Earth on April 19 after spending 12 days in space.

Well, isn't it a news that their first astronaut is a woman? Yi, is always on tv specially this evening because it was the space ship docking.

Here, i took a shot of our tv when Yi was talking on the phone. Yeap, they can talk to her even when she's up there in the space. 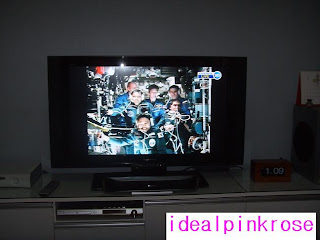 Email ThisBlogThis!Share to TwitterShare to FacebookShare to Pinterest
Labels: korea/koreans

have a great friday