The elementary school near my apartment 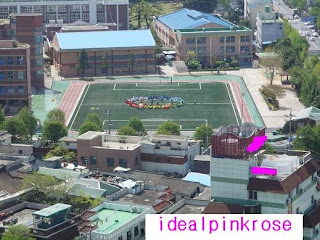 This picture is taken from my apartment. It is the elementary school and it seems like there was an occasion in the school so the children were celebrating it by dancing and playing. I guess it was their sportsfest. I just heard a noise and when I looked out, I saw the children formed a circle and moving with the tune of the music. After dancing they played and cheered.

On weekend, it's also fun to see some people or children playing soccer that sometimes looks like a real game because you'll see some shades and you'll hear some noise of an MC or announcer. Well, I don't need to go there to watch the game. I can just sit on the veranda and watch them if I want but I don't like sports. My hubby sometimes watch using binoculars. But that doesn't take longer, I think he's just curious about the players or the games.

Email ThisBlogThis!Share to TwitterShare to FacebookShare to Pinterest
Labels: celebration, days/ holidays, me